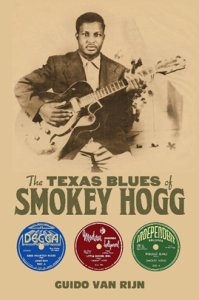 Guido van Rijn’s work on the life and music of Andrew “Smokey” Hogg is a vital addition to our knowledge of Texas blues, a regional style that has embodied the diverse cultural influences that have shaped its distinctiveness for more than a century. Texas was one of the last destinations of the illegal slave trade that continued into the 1830s. African Americans were not freed until Juneteenth – 19 June 1865, more than two years after the Emancipation Proclamation and more than two months after the end of the Civil War. Today, Juneteenth is celebrated worldwide to commemorate the ending of slavery in the United States.
When newly freed African Americans in East Texas were registered to vote in 1867 by the Freedman’s Bureau, more than 200 people, when asked their place of birth, said Africa. By the time blues coalesced as a musical form in the 1890s, FSA [Farm Security Administration] narratives record that some African Americans in East Texas performed on self-styled African fiddles and banjos. Henry “Ragtime” Texas played quills, a type of panpipe with African origins, and early bluesmen, like Blind Lemon Jefferson, were known to perform on guitars at hoedowns in the country for both white and black audiences.
The blues of Smokey Hogg are indicative of a generation of musicians who left the country and moved to the city, often during the Great Migration, carrying with them the traditions in which they were raised. However, when faced with the dilemma of the urban world, like his contemporaries Muddy Waters and Elmore James (who migrated from Mississippi to Chicago) and L.C. “Good Rockin’ ” Robinson, among others (who left Texas for California, settling in Los Angeles, Oakland, and the San Francisco Bay area), Hogg adapted and assimilated what he perceived as new opportunities in the vast landscape of commercial recording.
Smokey Hogg, while not a seminal bluesman, was nonetheless significant in the ways in which his ubiquitous approach to the blues emerged and evolved. Clearly, Hogg never lost touch with his Texas roots. Born in 1914 in Rusk County, in East Texas, the epicenter of Texas blues, his recordings echo the legacy of his forebears, but also reflect, and at times, challenge the prescience of his contemporaries, including Big Bill Broonzy, Black Ace, Lightnin’ Hopkins, and Peetie Wheatstraw, whose vocal style he embraced.

Guido van Rijn’s research is impeccable, even though writing a biography about a musician, never interviewed and who died about sixty years ago, poses nearly insurmountable obstacles. The details of Hogg’s life are sketchy. At best, Guido skillfully interweaves anecdotes and oral accounts with the historical facts he was able to establish to build a chronology that establishes the context of Hogg’s career. However, given the difficulties confronting him, Guido smartly devotes most of this book to the transcription and assessment of the lyrics of the 256 songs that Hogg recorded for multiple labels.

The sheer number and breadth of Hogg’s recordings not only revealed his astute awareness of the music of his contemporaries that he likely heard on the radio and on record, but also in live performance, from the country blues of Lightnin’ Hopkins to the barrelhouse piano of Alex Moore. Moreover, Hogg demonstrated his understanding and appreciation of the blues as a means to give voice to his innermost feelings and allude to his travails.

In his analysis of Hogg’s songs, Guido looks for clues to autobiographical elements in the lyrics. He explores possible connections to Hogg’s personal life experiences, and traces and compares, whenever possible, the multiple takes recorded by Hogg and their relationship to records made by other blues artists. Overall, despite the clear limitations, Guido van Rijn’s book about Smokey Hogg is a multifaceted narrative that is at once informative and illuminating.